03.07.2013
Translated from Turkish by Translators For Justice
Source: http://mimesis-dergi.org/2013/07/san-francisco-parklarinda-neler-olmustu/

In May 1962 a comedy titled “The Dowry” was produced in San Francisco parks. The theater group, called The San Francisco Mime Troupe, was founded some years before by R. G. Davis, who was both dance and mime. Michael William Doyle, a historian, briefly summarizes what was so special about the Troupe: “[…] the Mime Troupe may well have been the first artistic company in a generation to establish or perhaps reclaim the public parks as a performance venue.”[1] In less than ten years parks and open-air venues became the most important spaces for the American counter-culture movement.Davis called the performances his group put on “guerilla theatre” because of the continual confrontations the Troupe had with the police and officers of the San Francisco Park and Recreation Commission. Their name came from Peter Berg, another member of the Mime Troupe, and it was inspired by a quotation by Che Guevara: “The guerrilla fighter needs full help from the people of the area”. From the very beginning of the struggle he intended to destroy an unjust order and through guile and craft, replace the old with something new.” [2] It would be easier to make sense of the connection between the Troupe and the idea of guerilla warfare when one considers that the troupe’s repertory was in the form of commedia dell’arte, against the (Vietnam war) and racism, and comprised of “leftist ‘politcomedies’ rather like the Brechtian and, especially, Piscatorian traditions.” [3] Davis and his team had planned to contribute artistically to the enormous change in the US through such street performances. They preferred to return to the old campaign traditions in order to establish an independent people’s theater model, and thus proceeded through commedia or minstrel forms. 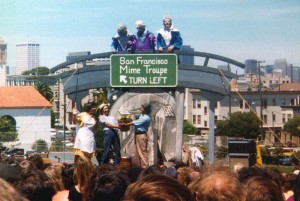 In 1965, Davis wrote a manifesto titled “Guerilla Theater”, which would be extremely popular and propose a common frame in the search for a balance between politics and art. In this short but striking text, he advised his young followers as follows: “For outdoor performances select an intimate grassy area in a park or place where many people congregate, and play on Saturday or Sunday afternoons. Go where the people are on street corners, in vacant lots, or parks. […] Begin the show by playing music, do exercise warm-ups, play and sing, parading around the area, attract an audience. […] For Commedia style, the masked characters have to move well to illustrate what they are saying and all must speak out so the audience can hear fifty feet away, over the street noises. […] Use a funny script, adapted for your own purposes (Moliere is excellent); cut out excess dialogue, update the language and clearly delineate the action. A minstrel show is another possible form; it is obviously a good vehicle for civil rights problems.” [4]
The Mime Troupe quickly became famous, and grew even more through the young artist/activists Davis brought in. Not only actors, but also writers, sculptors, musicians, dancers took active roles in the troupe’s entertaining performances, and they had the chance to gain invaluable experience by observing the logic of political-artistic performances in public spaces. By 1966, a group of approximately twenty people left the troupe to practice the reality that had been imagined on stage by moving to a different part of the city where they fromed an alternative collective. Hence the second stage of “guerrilla theater” began. Inspired by a group of revolutionary peasants who started to farm commonly-held land during the English Civil War, they called themselves “the Diggers”. Peter Coyote, a founding member of the Diggers, muses on how the Mime Troupe contributed to his personal experience: “It was in the Mime Troupe that I first really got introduced to a comprehensive world view, a way of looking at the world and analyzing it according to inherently Marxist principles. Not necessarily doctrinaire, but analysis: class, capital, who owned what, who did what, who worked for what. And it was like speed for imagination… Suddenly, everything came together, your intellectual life correlated with your artistic life.” [5]
Rather than being an art group that expressed the need for change, the Diggers aimed to be a commune that became change itself. This choice was not far from the goals of R. G. Davis, who initially determined three missions Davis wanted his fellow troupe members to be loyal to while they were creating a performance: teaching, inciting change, and being an example of change. Holding the full ethical weight of their beliefs, these principles became a way of life for a commune that aimed to realize a utopia not only on stage but also in daily life. The Diggers established themselves in the Haight-Ashbury area of San Francisco and founded a utopia-city there. The project was known as the “Free City”, and every act within the communal space was free of charge. The commune’s growing community comprised well-educated young people around 20 years old who were mostly from white middle-class families. The Diggers created a festival atmosphere in which the seeds of famous music bands, such as Jefferson Airplane and Grateful Dead, sprouted and grew.
Experiences with theatrically interesting consequences were being formed there: “To this end, the Diggers borrowed from the Mime Troupe the ensemble form, as well as the aggressive improvisational style, the itinerant outlaw posture, and the satirical social critique mode of commedia dell’arte. […] In the process they attempted to remove all boundaries between art and life, between spectator and performer, and between public and private. The resulting technique, which they referred to as “life-acting,” punned on the dual meaning of the verb “to act,” combining the direct action of anarchism with theatrical role playing.” [6] To give a sense of what the troupe was doing, one can recall “Full Moon Public Celebration”, an act that was performed in 1966 as a Halloween celebration.
The members of the Diggers built an approximately 13 feet-tall yellow frame at the intersection of Haight-Ashbury (or, Psychedelphia as they called it) where they lived. It was called the “Frame of Reference”. Two eight-foot puppets were maneuvered back and forth through the frame. A dispute started about which side was ‘inside’ and which ‘outside’. Then both puppets tried to lead the bystanders to their side, and convince them to change their “frame of reference” by passing through the frame. At the same time, the Diggers distributed smaller necklace versions of the Frame. The next step was a collective play called “Intersection”. In this play, the participants crossed the streets in a way which traced as many different kinds of polygons as possible, impeding the vehicular traffic. The play was open to outside participation but no one was forced to participate. Most people preferred to remain as spectators. In almost an hour, the number of participants and spectators reached 600. Then traffic started to peak. Meanwhile, the police arrived at the scene. Absurdly funny moments occurred when the police officers started dialogue with the puppets. When the police wanted them to end their activity due to their impeding traffic, the Diggers started chanting slogans like “The streets are public, these are our streets”. The performance ended with the arrest of five Diggers members. In spite of the police intervention, there were many people waiting and protesting the arrests: “Frame-up” was the slogan heard. [7] 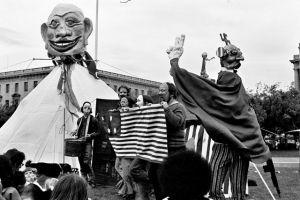 The Diggers’ acts were not approved by Davis, the founder of the Mime Troupe. Since his first manifesto, Davis continued to advocate the idea that theater should remain as is. “The problem is to attract an audience to a type of theater it is accustomed to attending, and discover forms that will carry the weight of ‘effective’ protest or social confrontation, without turning theater over to twisted naturalistic symbolism, pop art, camp, or happenings for the chic.” [8] In fact, during his lead, the Mime Troupe’s performances have always been organized with a well-drawn line between the spectator and the actor, life and performance. Some have claimed that even the so-called ‘improvisation’ on their stage was actually the product of meticulous work. For Davis’ ‘guerilla theater’ paradigm, the primary goal was to warn/wake up the masses with a ‘blurred conscious’ and a disinterest in their own interests in bourgeois society. On stage, utopia was implied but not put into practice. In contrast, the Diggers preferred to violate the borders that separate life from art so as to realize their utopia through the “Free City” project.
In a short while, this split in “guerrilla theater” gained a new aspect by the emergence of a new approach that started in 1967, when a group of Diggers members moved from San Francisco to New York. This group was part of an extension of the original Diggers group, but some disagreements gradually emerged between them. Above all, this new group functioned in the financial capital, that is to say the heart of the system. In Richard Schechner’s words, they had to hit and run in a “hostile” [9] environment. The first sensational act of the New York Diggers was at the Stock Exchange: the group members dropped dollar bills down the visitor’s gallery they had secretly entered. A scene of chaos ensued as traders frantically jumped at the fake bills. The primary strategy of the New York group was to struggle through sensational acts.
The New York Diggers created one of the most militarist interpretations of “guerrilla theater.” Their confrontational methods were the start of any number of disputes that would eventually weaken the ties with the San Francisco group. For the San Francisco group, the most important thing was the “Free City.” They dedicated their acts to reinforcing the borders of their living environment and making a socio-economic revolution within those borders. The New York group was against this defensive approach on the basis of “ghettoization”, and advocated a declaration of war against the system in its own territory. After the New York group broke with the Diggers in San Francisco, the reorganized themselves into the Yippies (Youth International Party). All three kinds of “guerrilla theater” continued the work they had determined was important by performing and spreading their ideologies throughout the early 1970s, when the “new” America was being built.

Despite all these arguments and fractions, the experience of the “guerrilla theater” in the United States in the 1960s had a huge impact on the system. “Artists, particularly those who worked in the theater, used the stage to bring au courant controversies and sweeping social commentaries to the fore of public awareness. Political protesters, meanwhile, began increasingly to adopt dramatic forms as a means of expressing their collective dissent from a society they saw as morally bankrupt, racist, militaristic, and culturally stultifying. Together these two developments contributed a distinctive sensibility to Sixties’ cultural politics; the interaction of New Left politics and avant-garde performance fused to produce the nation’s first counterculture to be called by that name.” [10]