02.06.2013
Translated from Turkish by: Translators for Justice
Source: http://www.radikal.com.tr/turkiye/iste_kapatilan_ntv_tarihin_yayimlanmayan_editor_yazisi-1140079

Popular science periodical NTV Tarih (NTV History), has devoted its 54. edition to Gezi ressistance. The publication of this edition has been surprisinly stopped last minute. The periodical sells average 35,000 pcs and belongs to Doğuş Group (one of the biggest media owners in Turkey). Below you will find the translation of the editorial that would be taking place in that unpublished edition, and its cover design. 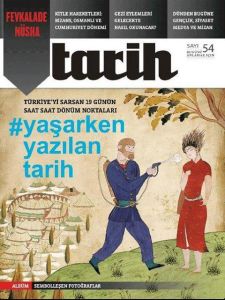 They were bold yet wise. They were “one and only” yet united. They were alone yet crowded. We haven’t known them like that. Perhaps even they, haven’t known themselves as such. When I saw them at Gezi park, just two days before their tents were set on fire, “how modest and composed they are” I had thought. Could never foresee that these kids would be the initiators of the broadest spontaneous movement in Turkey’s history.

Who could predict that they would be creating an earthquake impact on all organizations and institutions, from political parties to the most marginal organizations, from media to police, from municipality to judiciary, from labour unions to business communities.

In the end, they were not “3 or 5 chapullers”( this is how the prime minister calls them, meaning “mosstrooper”), but weren’t they either the same young people that we –adults-, repeatedly accused of being “unread, uncultured, empty (ignorant) , unconscious, corrupted, unaware of self-history, ill-mannered, selfish, apolitical, etc”?

Seems they were not. They first proved this to themselves and to the whole world. Let alone understanding their ressistance, we had difficulty to even sense it. We were ridiculed by their sense of humour, could not even act as a postman within their communication.

Regardless of the world view or ideology, all organizations, institutions and persons trying to interpret political matters, the way they choose to explain, based on their own political views, are now “past expiry date” compared to these young people’s “co-produced” demands and street chants. While some of the spokesmen of progressivist, leftist, liberal, nationalist fractions were trying to compile a revolutionary romance out of these young people, who are the real starter of this action; the leading actors of conservative, rightist, muslim identity condemned them by seeing them “pawns of an international conspiracy”. None of them could see that in the “Big Game” the “pawn” coming to the last raw of the chess-board would promote to being the “queen”.

From the very first day since it started publication, NTV Tarih (NTV History) issued a special full coverage edition for the first time. This special edition, this “tremendous copy” with its standing pages is devoted to Gezi Park movement, and to other incidents, notions, debates, analysis and comments reminded and brought up by it. Our goal is to reflect and “record history while being lived through” and to contribute to future’s historical material.

We, as NTV Tarih ( NTV History), hereby, dedicate this specail edition, to all who lost their lives, to their families, to the wounded and maimed, and to all others who are suffering and feels frustrated.

We hope to live in a world of peace, brotherhood, and, together with all means of diversities .